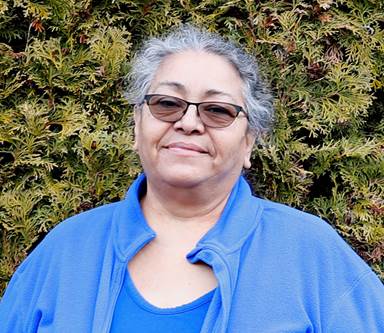 Rosa is 60 years old and has had congestive heart failure, chronic kidney disease, and high blood pressure since 2009.

When Rosa was first diagnosed with congestive heart failure, her ejection fraction, a marker for the hearts ability to pump blood was significantly reduced at 20% (normal is 55-70%). For a long time her heart failure presented as an untreatable cough and it was hard for her to even complete a sentence without coughing and gasping for air.

Rosa was seeing her cardiologists and receiving medical treatments. At times she was at odds with taking drugs, in part because she did not understand what was happening with her body medically and she wanted to do things more naturally.

For years Rosa would have intermittent improvement of heart function followed by exacerbations of heart failure requiring hospitalization. At her worst, she was only able to walk minimal distances due to severe shortness of breath and fatigue. Rosa also had been battling depression on and off for several years.

In June 2017, Rosa had a heart attack and was hospitalized again. Her echocardiogram showed an ejection fraction of 27%, diffuse lack of movement of the heart wall, moderate inability of the heart muscle to relax, and moderately severe leaking of her mitral valve. Her kidney function was significantly impaired due to progressive chronic kidney disease.

Rosa was discharged on multiple heart medications that she took faithfully. She still had a hard time with chronic shortness of breath and fatigue.

From May through December of 2018, Rosa participated in the Mercy Blu Room twice a week consistently. Gradually her mood got better and her energy improved. She was been able to do things without severe shortness of breath and her emotional resilience to stress greatly improved.

Rosa had a repeat echocardiogram in November 2018 which showed that her ejection fraction significantly improved to 47%, her ability to relax the heart muscle improved, and her mitral valve leakage improved as well.

Rosa is now exercising, her stamina and physical energy are the best they have been in years. Her depression has lifted. Her mood and outlook on life are much more optimistic. She attributes this remarkable healing to the Blu Room which she continues to use twice per week. She is now working on healing her kidney function and has the confidence to know she can do it

Blu Room is an internationally registered trade and service mark of JZ Knight. Used with permission. US Pat. No. 9,919,162. Testimonials are not intended to make claims or even imply that the Blu Room can be used to diagnose, treat, cure, mitigate or prevent disease. Testimonials have not been evaluated by the FDA or any other regulatory entity. Blu Room Enterprises, LLC makes no representations or warranties as to results, which may depend on numerous factors beyond the control of Blu Room Enterprises, LLC.