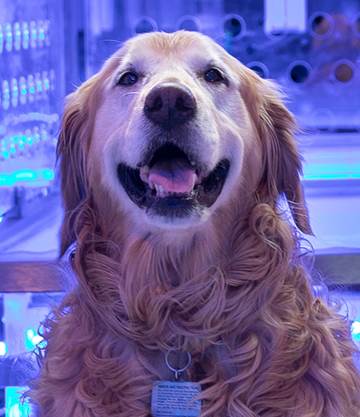 No fluid buildup in heart sack!

Our dog Ramaya is an 11-year-old Golden Retriever. In June, we took her to the ER.

We learned she had a tumor on her heart and that fluid from the tumor had been filling the heart sack putting pressure on the heart. The vet drained the fluid and scheduled Ramaya for surgery to put a drain valve in the heart sack.

We started Ramaya in the Blu Pet while waiting for our surgery date. The day of surgery came and when they did an ultrasound, they found no fluid in the heart sack so they cancelled the surgery and told us to come back in two weeks.

Ramaya has done Blu Pet three times per week since July. She became more active and alert, happier and healthier. Each time we had an ultrasound, no fluid was found so they would extend the time before the next ultrasound.

Now five months since her initial diagnosis, Ramaya had another clear ultrasound with no detectable fluid around her heart sack.

Ramaya wakes up earlier and wants to play several times a day. Her mobility has also improved so that getting up from laying down is not difficult for her anymore.

Blu Room is an internationally registered trade and service mark of JZ Knight. Used with permission. US Pat. No. 9,919,162. Testimonials are not intended to make claims. Testimonials have not been evaluated by the FDA or any other regulatory entity. Blu Room Enterprises, LLC makes no representations or warranties as to results, which may depend on numerous factors beyond the control of Blu Room Enterprises, LLC.