TESTIMONIAL A change of mind led to a change of health 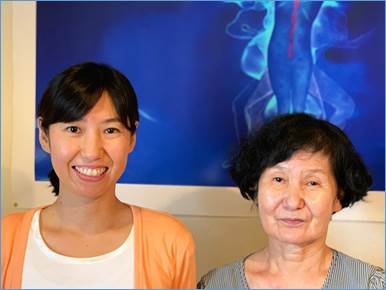 I am a student of RSE. I have been learning through RSE teachings all these years. And I have experienced truly remarkable changes in mind and body since I started regular Blu Room sessions.

In this letter, I would like to share a healing story of my mother. Kayoko is not a RSE student. A few years ago, her health checkup result showed that she had problems in her lungs that would lead to emphysema. Her lung function was rated “C.” She had been a smoker for a long time and was having difficulties in breathing even when she walked up a gentle slope.

From the opening day of the Blu Room in Japan my partner and I have been going to Blu Room regularly and we both experienced remarkable changes. So I thought that Blu Room would help my mother Kayoko change too. I decided to take her there at least 10 times as Dr. Matt suggested me. However, because my mother had strong tendency to resist new/unknown things, it was difficult to carry out my plan. I had to face her resistance for every visit. But I stayed committed and took her to Blu Room once every month.

Gradually I noticed Kayoko’s mind started to change. She had less resistance. And after each session, she was smiling more and open minded. She had positive attitude and saw hopes in her life. She was brighter. Though she would go back to her usual patterns after a few days, she was clearly changing. She was far different from who she used to be. I thought, “if her mind is changing, her body must be changing too.” So I continued to take her to Blu Room after her 10th session.

My mother finally admitted that “Blu Room works” and changed her attitude. She does no longer resist going to Blu Room. She is more confident and is eager to heal other parts of her body. Moreover, she decided to attend Class 101 in Japan! Knowing she had had negative opinions about RSE, this was such a wonderful surprised to me!

I am very grateful for all the changes Blu Room brought to us. Observing my mother’s changes through Blu Room sessions has been an amazing experience. We will continue to visit Blu Room and look forward to seeing more changes in the future.

Blu Room® is an internationally registered trade and service mark of JZ Knight. Used with permission. US Pat. No. 9,919,162. Canada Pat. No. 2,998,840. Testimonials are not intended to make claims or even imply that the Blu Room can be used to diagnose, treat, cure, mitigate or prevent disease. Testimonials have not been evaluated by the FDA or any other regulatory entity. Blu Room Enterprises, LLC makes no representations or warranties as to results, which may depend on numerous factors beyond the control of Blu Room Enterprises, LLC.