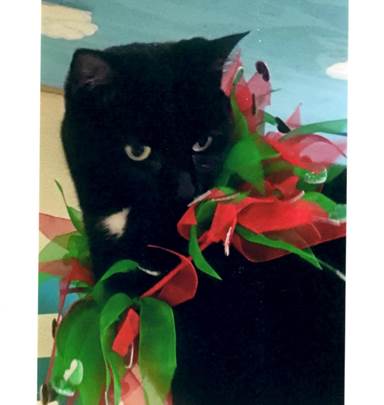 Approximately a year ago Minnie Perl, my 9-year-old cat, began to act strangely. She began to show signs of extreme stress, sleeping with her back pressed into corners or against the back of the stairs. Then she began throwing up volumes of undigested kibble and then even canned cat food. She began “jetting” down hallways and stairs as if chased by ghosts. Always a small and fragile cat, she lost two pounds from her ideal weight. Blood tests revealed hyperthyroidism with T4 values in the high teens, far above normal. She was placed on thyroid medication.

With the medication alone, Minnie’s T4 continued to rise. The side effects worsened the vomiting even on an empty stomach, so the meds were discontinued. Next she completely stopped eating. She laid around, lethargic and with glazed eyes.

In late December, after five days of not eating anything, I came within hours of making the decision to have her euthanized. I offered her one last morsel of her favorite fish-based food which I had been withholding and miraculously she started eating. I could only feed her a teaspoon at a time. If she ate more she would throw it up. After the holidays I consulted with Dr Overlie again and this time he came up with a plan to make the Pet Blu Room affordable for me so Minnie could try twice a week for 12-14 visits.

We measured T4 levels prior to the first session, revealing scores in the 20’s. Gradually, she was able to tolerate the full 9 minutes of UV. The vomiting tapered off and finally stopped for the most part. At the conclusion of the first course of Pet Blu treatments, we repeated the blood work with high hopes, only to discover that it was higher than it had ever been. We reluctantly agreed to discontinue the Blu Room.

Although her blood values had worsened, I had a very different kitty. Minnie had stopped vomiting, was eating well, was much calmer with much more normal behavior. I was willing to try the medication again with the goal of keeping her comfortable and prolonging her life as long as possible. Dr Overlie offered one more course of Pet Blu sessions and then to test her again.

This time Minnie was a pro at the Pet Blu Room experience. She also tolerated the application of the medication which she had previously violently resisted. Now calm and with the vomiting long behind her, Minnie regained over one pound of her lost weight. And the miracle? After another course of Pet Blu sessions, her T4 value fell from it’s high in the upper 20’s to just 1.5, well within the normal range. And it has stayed at that value even after the Blu Room was discontinued. Now Minnie Perl is her old self. I have my best feline friend back. I plan to give her booster Pet Blu sessions from time-to-time with blood work to chart progress.

Blu Pet™ is available at: